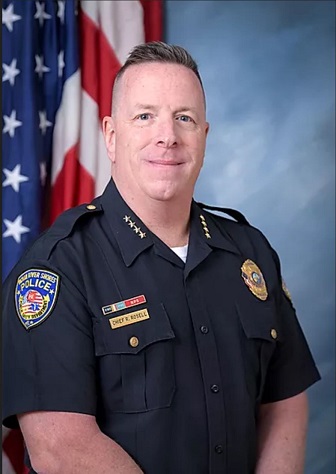 He is a former United States Marine, a former NJ Army National Guardsman and a former member of the US Army Reserve and held the rank of Master Sergeant.

A message from The Public Safety Director

The Commission of Florida Law Enforcement awards accreditation status to police departments that reach a level of professional standards dictated by compliance with over 300 policies that govern each aspect of the agency's operations. These policies include structure, organization, training, hiring of personnel, deployment, responsiveness, and routine calls for service. With the realization accreditation is a demanding and full-time process, policies and procedures are constantly being updated and revised. The Commission requires that all policies are accompanied by three years of documentation which proves agency compliance. This level of accomplishment has been achieved by only 120 of the 400 law enforcement agencies in the State. Indian River Shores Public Safety was first awarded accreditation status in February 2009 and this accreditation was valid for three years, after which the Department was required to once again demonstrate it has continued to comply with all the policies dictating its operations. On February 21, 2012, February 25, 2015 and February 21, 2018 accreditation status was again awarded to Public Safety. Indian River Shores Public Safety has now held Commission of Florida Law Enforcement accreditation for 12 consecutive years, as the Agency continually demonstrates that it is in compliance with the level of professional standards required by the state.

Deputy Chief Mark Shaw is responsible for all law enforcement and fire rescue activities including planning, administrative management, personnel matters, and equipment maintenance. Albert Iovino is the Captain of Law Enforcement Operations and is responsible for planning, administrative management and personnel as relates to the Public Safety Officers. Reporting to Captain Iovino are the three shift sergeants, Shawn Hoyt, Bart Crosby, and Kip Benham. The shift sergeants are primarily responsible for all patrol activities, and providing assistance to the officers assigned to their shift, including emergency calls and patrol activities. Chris Beaumont is Lieutenant-Fire/EMS Operations and in addition to overseeing all fire and EMS activities, also manages the Detective and Community Liaison activities within Public Safety. Reporting to Lieutenant Beaumont is Detective Sergeant Kyle Smith. Lieutenant Beaumont is also responsible for managing the Department’s new Code Red program. Detective Smith is responsible for all criminal investigations, crime scene processing, and managing any follow-up related to criminal complaints. Captain Iovino and Lieutenant Beaumont report to Deputy Chief Mark Shaw.

News You Can Use provides Town residents with current media releases, events, articles of interest relating to health and safety, Public Safety services, hurricane information, and how to best prepare for any weather emergency. This section of the website is continually updated and should be accessed periodically to obtain updated information on topics of interest.