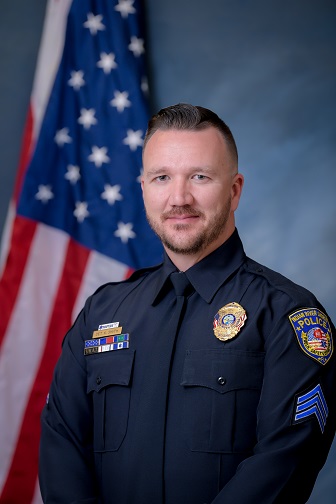 - Detective Sergeant Kyle Smith is the lead Detective assigned to Investigations. In 2005 and 2006, as a member of the US Army, he deployed to Iraq and completed two tours. He served as a .50 caliber machine gunner and conducted convoy security missions. After returning to Florida, Kyle obtained certifications as an EMT, Paramedic, and Firefighters from Indian River State College.

In 2011, Det. Sergeant Smith was hired by Indian River County Fire Rescue as a firefighter/paramedic. He served on the department’s Honor Guard and was a member of the Dive/Rescue Team, in which he obtained certifications as a public safety diver and dive rescue specialist (DR-1).

In 2014, Det. Sergeant Smith was hired as a Public Safety Officer at Indian River Shores Public Safety and completed the Police Academy at Indian River State College in 2015. He completed SWAT school at NASA Kennedy Space Center in 2016. In 2018, he graduated with his Bachelor of Science Degree in Public Safety and Emergency Management from Grand Canyon University. Shortly after, Kyle was promoted to Detective in October 2018 and most recently to the rank of Sergeant in 2020. He currently serves as the Lead Investigator for persons/property crimes and is the agency’s Evidence/Property Custodian. Kyle is also certified as an instructor in Firearms and TASER and is a Field Training Officer for both law enforcement and emergency medical capacities.